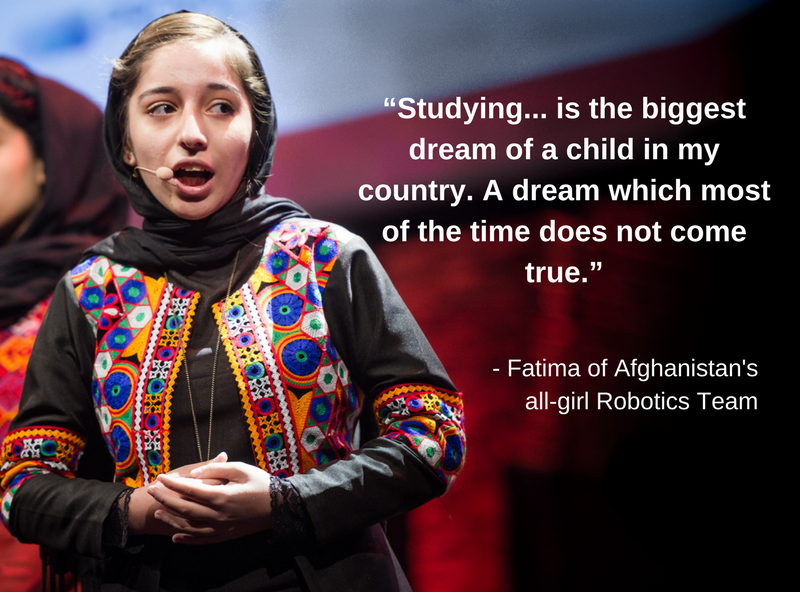 Self-driving cars, the Internet of Things, and Machine Learning algorithms.

In order to compete and prosper in the 21st century, countries must be able to access and harness the groundbreaking technologies that are transforming our world.

But there’s a real danger that large parts of the globe will be left behind. The very technologies that can improve our lives also threaten to exacerbate inequalities and perpetuate dangerous biases. And unless the benefits of Artificial intelligence (AI) are distributed equally, it may widen the gap between world’s richest and poorest communities.

We want to make sure that doesn’t happen.

That’s why we’re raising money to build a high school of science, technology, engineering, arts and math (STEAM) in Afghanistan to raise the next generation of global tech leaders.

Roya Mahboob, Sarah Porter and founding partners Ada-AI and Digital Citizen Fund will build a high school in Afghanistan that provides students with critical technical skills and exposure to emerging technologies and AI. With support from the local leaders, we’ll work with global experts in the sciences and tech to develop a curriculum that’s sensitive to the ongoing digital revolution.

With the right training and support, today’s Afghan children can become tomorrow’s global tech leaders—equipped and empowered to build a new and prosperous Afghanistan that can compete on the world stage.

With your help, we can encourage marginalized communities and underrepresented voices to pursue careers in tech in order to narrow the global wealth gap, strengthen social mobility, and mitigate racial and gender inequalities.

After the completion of the high school, the team plans to follow up with the creation of a university—
“the MIT of Afghanistan”—focusing on the tech and sciences and modeled off of the Massachusetts Institution of Technology in the United States.

Roya Mahboob and Sarah Porter’s inspiration for this initative emerged from their involvement with Afghanistan’s all-girl Robotics Team, who has won tech and robotics competitions around the world. Mahboob’s non-profit Digital Citizen Fund founded the team and has been one of their most important sponsors. Porter and her company InspiredMinds brought the team to the stage of World Summit AI in Amsterdam. 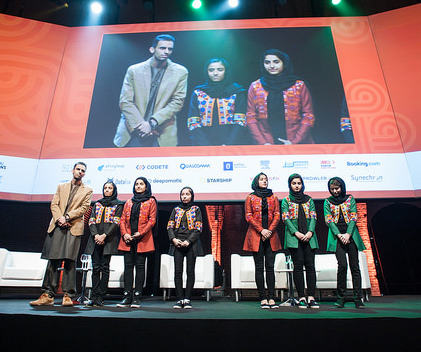 Afghanistan’s all-girl Robotics Team provides an example of what can happen when children are given the opportunity to learn—especially in STEM fields.

Afghanistan is a nation that’s suffered war and conflict for more than thirty years—and it’s had a devastating impact on generations of children and the country’s education system. There’s a shortage of teachers, especially women, and the nation lacks proper infrastructure for schools. Violent attacks on students and schools have made the pursuit of education a challenging, even dangerous task. And many Afghan children are forced to leave school to support their families.

But there’s reason to hope—and reason to continue to invest in change. School enrollment has risen since the fall of the Taliban in 2001. Prior to 2002, only a million students were enrolled in schools in Afghanistan and almost all of them boys. Now, the Afghan Ministry of Education estimates that over 9 million children are enrolled in school and more than a third of them are girls.

With your help, we can equip children in Afghanistan with high-quality education and 21st century tech skills—and transform their lives for the better.

Roya is an Afghan entrepreneur and businesswoman and one of the first female CEOs in Afghanistan. She founded and serves as CEO of the Afghan Citadel Software Company, a software development company based in Herat, Afghanistan. She is also the co-founder and CEO of Digital Citizen Fund, a non-profit organization based in New York that helps girls and women in developing countries gain access to technology. In 2013, Roya was named one of TIME magazine’s 100 Most Influential People In The World for her work building internet classrooms in high schools in Afghanistan.

Sarah has launched 22 tech and science products in 12 countries since 1996. She is the founder of Ada-AI, a global not-profit that advocates for inclusive and representative AI, and InspiredMinds, a group of science and tech strategists behind World Summit AI who supported the Afghan Robotics team in the wake of the Trump travel ban. Sarah is a regular keynote speaker on start-ups and women in business, an ambassador for the Royal Marsden, where she champions the use of AI tech in oncology advances, and a humanitarian first-response medic.

Ada-AI is non-profit organization working to ensure that Artificial Intelligence (AI) and other emerging technologies are developed and implemented in ways that are inclusive and equitable.

Our goal is to foster greater participation and representation in AI so that the technologies we create work for all of us.

For more information about the project or to donate, please visit: https://www.gofundme.com/STEAMschoolAfghanistan